It's the last one! After a rocky month I'm finally up and at'em so let's get to tha package! The theme was "Spring time is in the air". 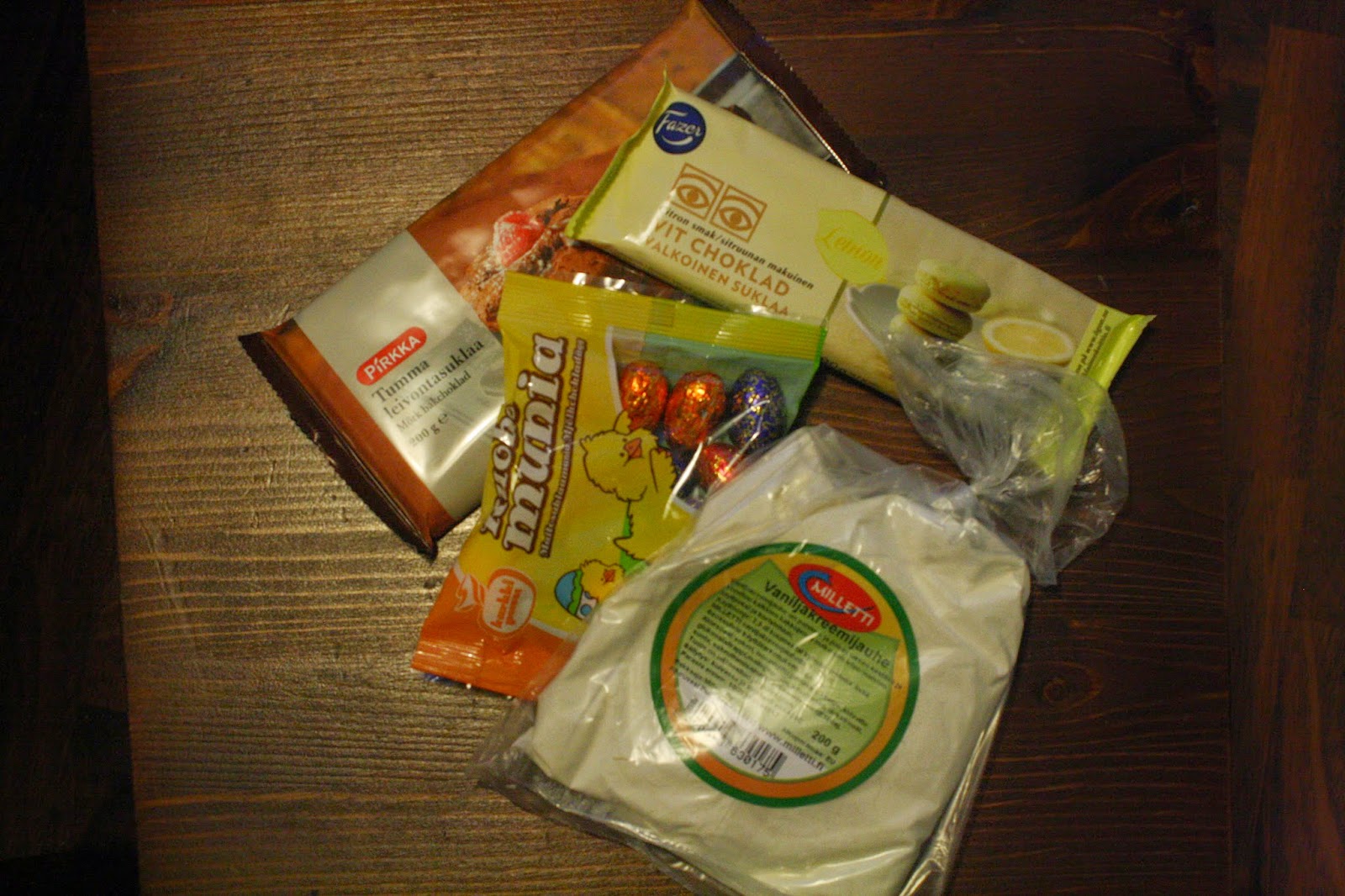 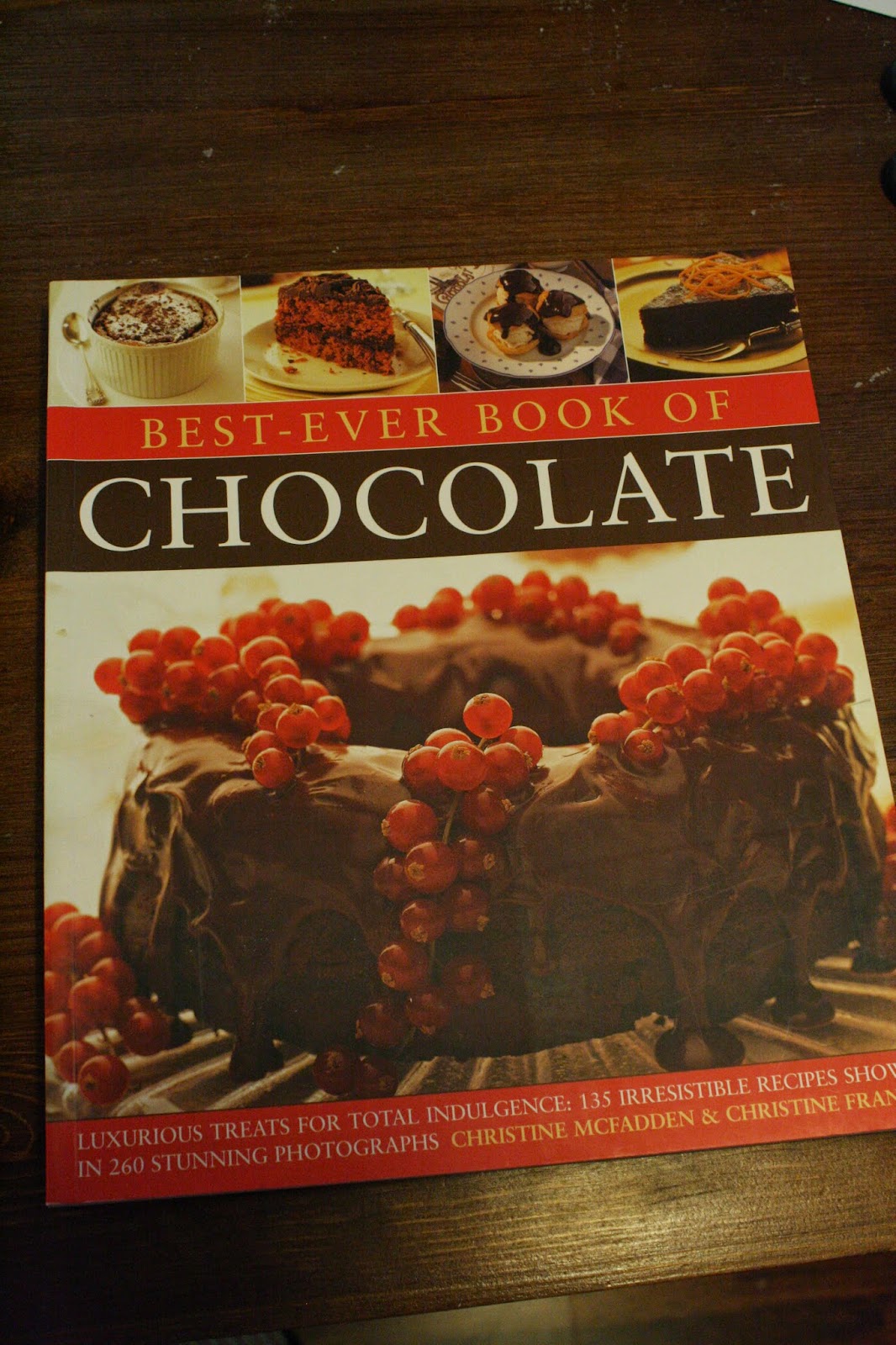 And then there was this beast. My parter apparently thought that she didn't quite deliver last month - I have a different opinion - so she sent me a book with hundreds of chocolate recipes. I LOVE chocolate so this is right up my ally.

And who was this mystery person *drumroll*: Heidi from Vauva-arkea ja avioelämää (FIN)! A fresh blog for me. She has been an amazing secret friend, I hope she knows how much I have appreciated her packages. Thank you!

I'm taking a break from Secret baking friend for now but I'm sure I'll return when the time is right.

A while back a finnish paper - Iltalehti - published an article online about the most common mistakes made in the kitchen. I read the article and not only am I guilty of some of these I thought that this would be an excellent subject to talk about with you.

Number one: You forget about tasting your dishes

GUILTY! I rarely remember to taste the things that I'm making because I have this feeling of over confidence in my head "oh it'll be fine" Nope. The truth is that the more components your dish has, the more you should taste it to make sure the seasoning is balanced with the flavours of the ingredients. So let's all promise to start having that tiny spoon next to the stove when cooking, okay? Because I know I'm not alone in this..

Number two: No prepping before cooking


This I do not only because I take photos for my blog but because it's actually very useful. I go through the recipe and prep everything before starting. This helps you to see that you have the things you need before you actually have to put them in the bowl.

So you've done all of your prepping and came to the conclusion that you have just a tiny bit too little butter so just replace it with some oil and baking powder instead of dry yeast. It'll be okay, won't it? No, no it won't. Although baking has the artistic decoration side everything before that is pretty much science. Literally. All the ingredients have to go together or your soufflé will be a pancake.

Number four: Too hot to handle 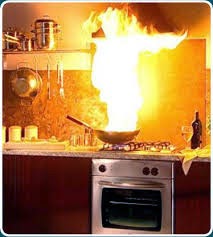 You got me again there.. The recipe calls for "a gentle simmer for ten minutes"? Let's blast full heat for five! NO! Believe me do not try to cut corners with time and heat. Too many good cakes have suffered a horrible dry death, too many steaks have dried up..

So you need melted chocolate and you think you can just set it in the microwave for two minutes and that's it. Well if you say so.. Or not. You should use a bain-marie meaning melting your chocolate over that gentle simmer mentioned before. Or if you use a microwave you should only put the chocolate in about 10-20 seconds at a time and stir after each time. This ensures that the fats in the chocolate don't separate and your chosolate heats up evenly resulting in a smooth, shiny pool of chocolate. I've burnt chocolate once, my kitchen smelled absolutely horrible afterwards. So I've learnt my lesson, now it's your turn. And what ever you do: do not under any circumstances melt the chocolate in a regular old saucepan. Do not do it.

Cookies crumbling? Cake batter deflating? Melt your butter slightly slower and your problems will be solved.

"I'll just use low fat products to make this cake a little less naughty." Okay, but you will have to risk curdling when heating. Cream can take the heat but using a little starch to stabilize the low fat product can help.

Cooking allows for a little creativity, but baking especially needs attention to detail. So don't just eyeball, measure! And level your measures.


Number nine: Three is a crowd

A crowded pan is never good. Everything releases moisture when heated so there needs to be room for the moisture to evaporate. If not you get soggy products so fry in batches to ensure a crispy result. Same goes for the oven. If you need to make a lot of something use two dishes. And I am guilty again!

Number ten: The pan is too cold

So you've done everything right: prepped the veggies, measured the flour and decided to use cream. Now to put the pan on the stove and chuck everything on so you can have dinner on the table quickly. There's one more thing. You need to pre-heat the pan. Yes I'm serious. This ensures colour and prevents sticking.

I do this! Yes I do. You're supposed to cut all meats against the grain.

If you don't rest cooked meat the juices won't settle inside and they'll just leak out when you cut in to it.

This I had no idea about. Apparently if you salt the marinade your meat is going in you should put only a little bit of salt in it and then re-salt the meat after the marinade is poured out.

Number fourteen: From the fridge to the oven

Guilty again! You should allow the meat to warm up in room temperature for a good 15-30 minutes before you put it in the oven.

If you boil your eggs for too long and too hard the yolk starts to turn gray. So start your eggs in cold water, get them to full boil and then reduce the heat to low. 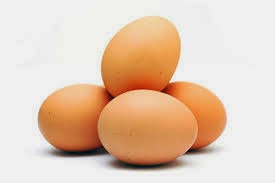 This took me ages to get. Hot pan results in dry eggs. A good, fluffy plate of scrambled eggs comes with time. Set the heat to medium-low and keep the mixture moving in the pan. You can take the pan off the heat because the eggs will continue cooking on the pan so don't keep it on for too long.

So there you go. The most common mistakes made in the houshold kitchens around the world. How many have you been guilty of? Let me know. And if you have any funny or dramatic kitchen disasters to report on leave me a comment down below or tag me in a photo on Instagram @tinyk02.

All photos are from Google searches.

This is a recipe I got from my secret baker friend in February's package. I translated the name of the cake literally because I thought it was pretty funny, but you can serve this for any occasion. This cake has the flavours of cocoa, coffee and nougat. I will give you the exact recipe I received. I had to make some adjustments so that I didn't have to spend too much money on things like I'd use only once. But enough rambling, let's get to it! 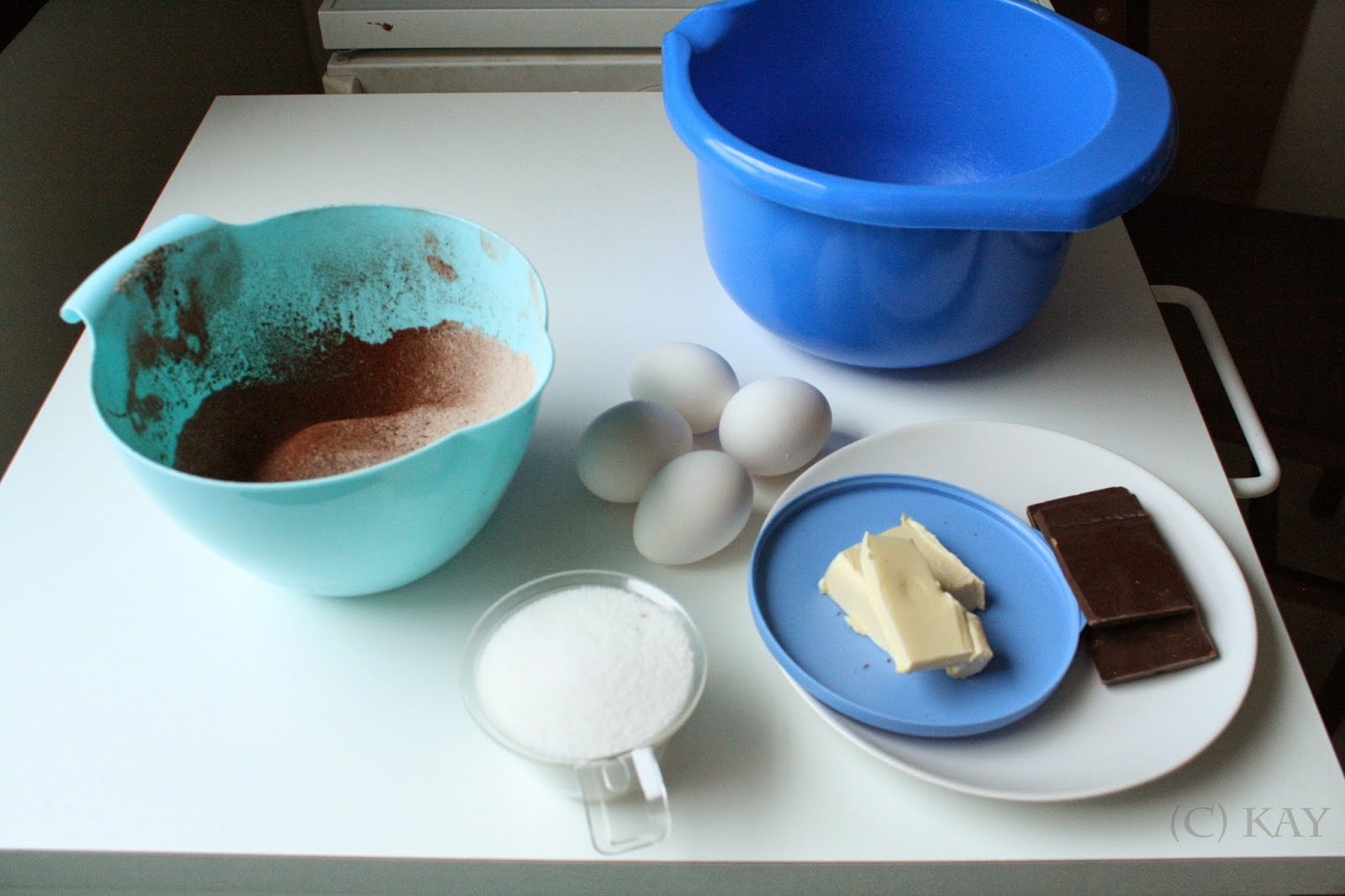 Beat the eggs and the sugar together until light and fluffy. 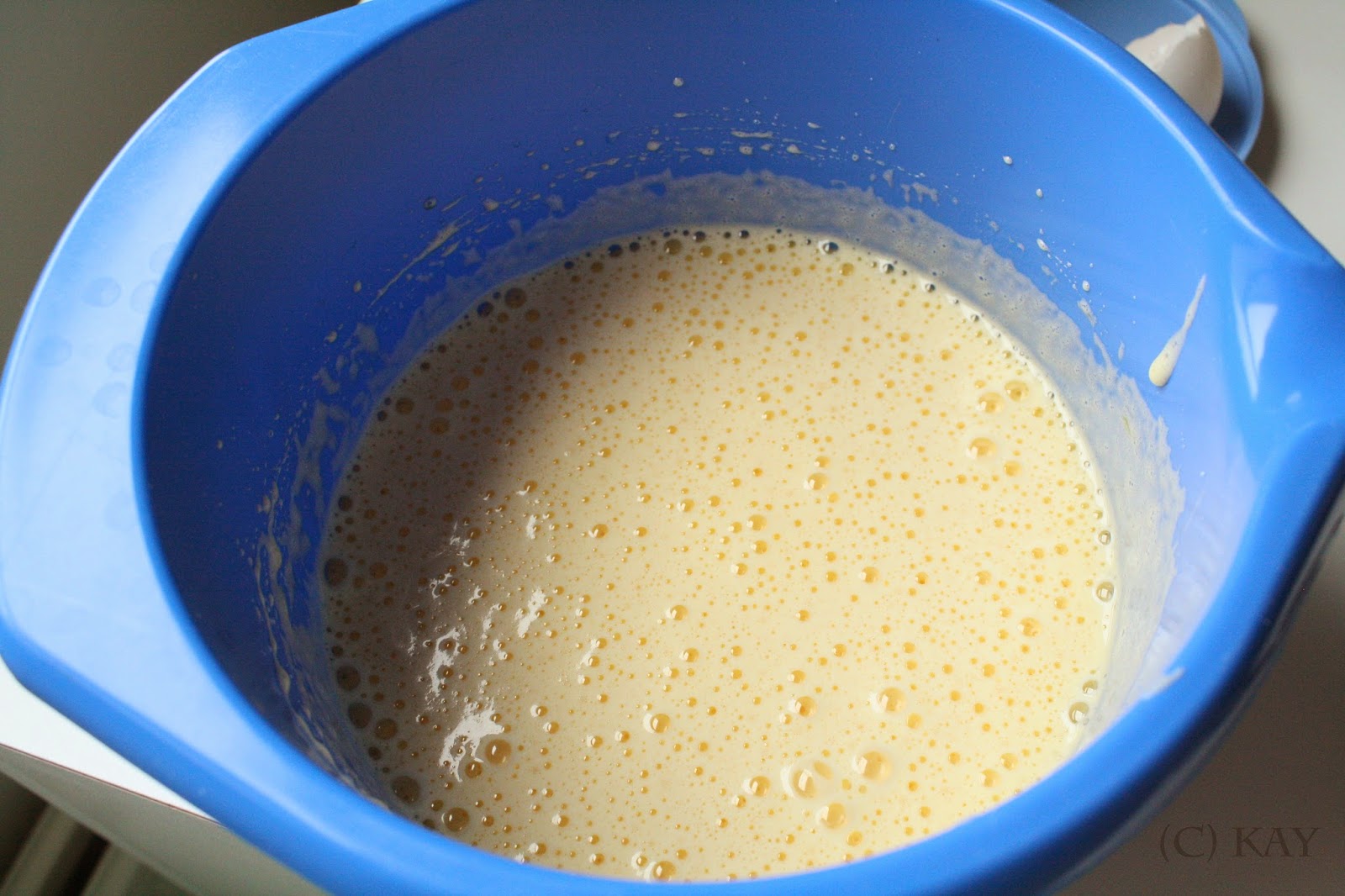 Mix together your dry ingredients and sift them carefully in with the eggs and sugar. Fold everything together carefully. Melt the butter and chocolate, make sure they don't heat up too much, and fold them in carefully. 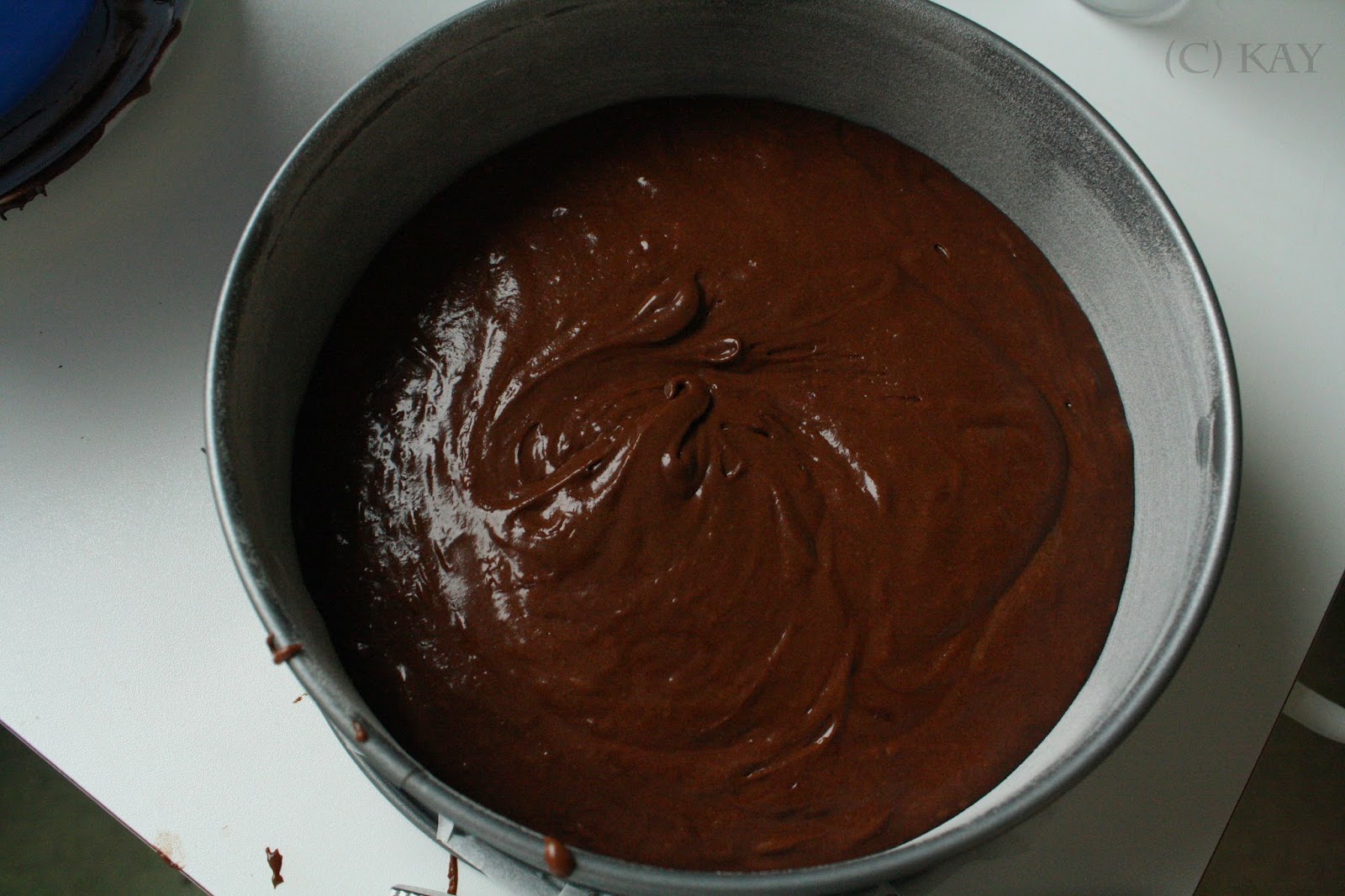 The recipe says to use a heart shaped tin but I don't have one so I adapted. Bake in 175 degrees for 30 minutes or until cooked. Allow to cool completely.

At this point I realized that my tin was too big because I only managed two layers out of it, three is the target. But I adapted.

Line your tin with cling film, put the first layer on top of it. 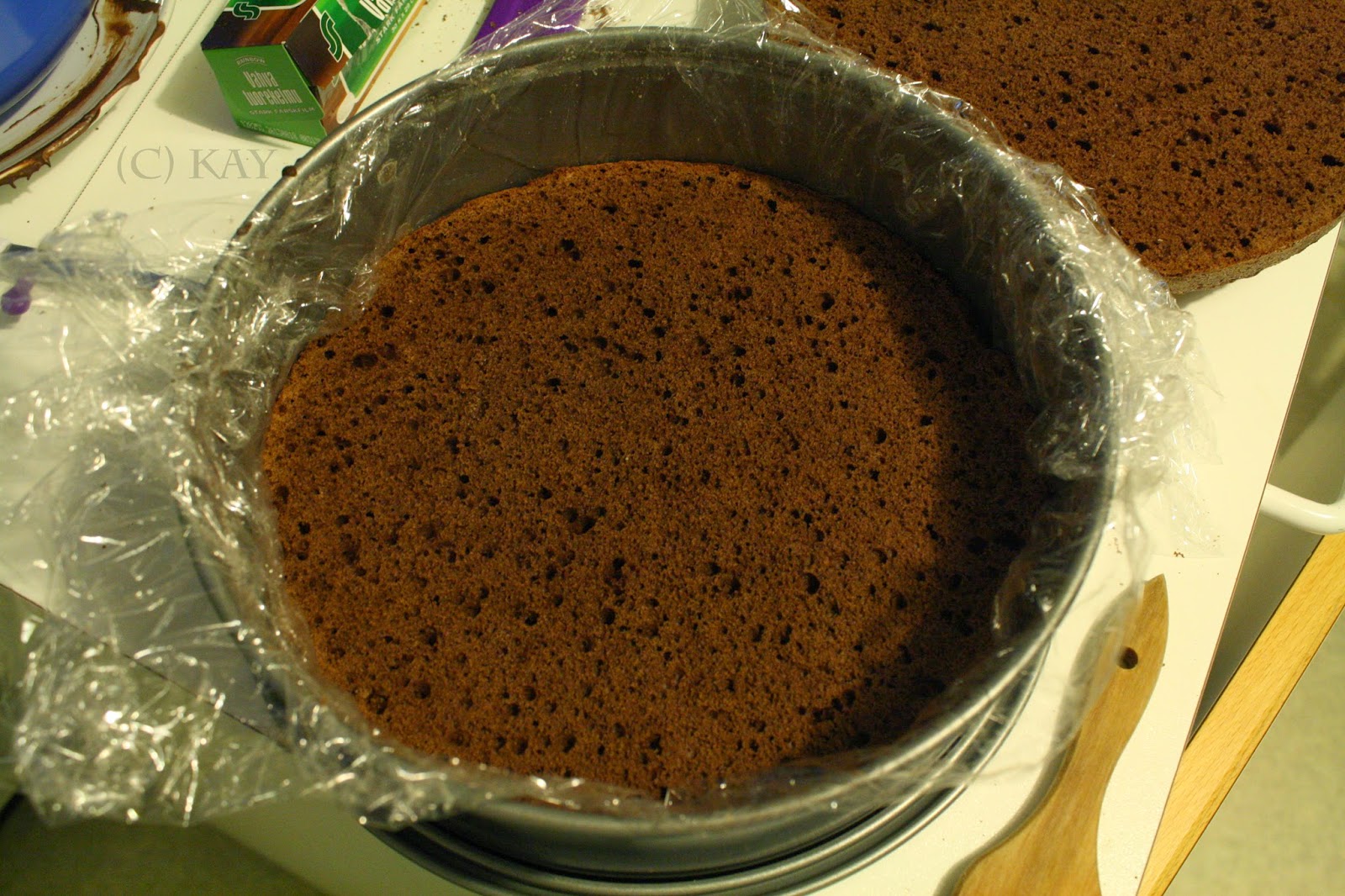 Soak the gelatin leaves in cold water while prepping the rest of the filling. Whip your cream until it's a little over tha soft peak stage. Fold in the quark, the crush and the sugar. At hits point the recipe made me a little confused because there was no mention of white chocolate in the ingredients but it says to add in melted white chocolate. I didn't add any because I didn't know how much to add.


Heat up the coffee liqueur (I used espresso) and melt in the sokaed gelatin leaves. Make sure to squeeze out the water completely. Pour in to the filling as a thin line mixing continuously.

Brush a little orange juice on the first layer of cake, then spread on some of the chocolate-hazelnut spread on top of that and spoon in half of the filling. Repeat on the second layer. Top off with the last layer of cake. Cover the cake with the cling film and allow to sit in the fridge for at least three hours or overnight if possible. 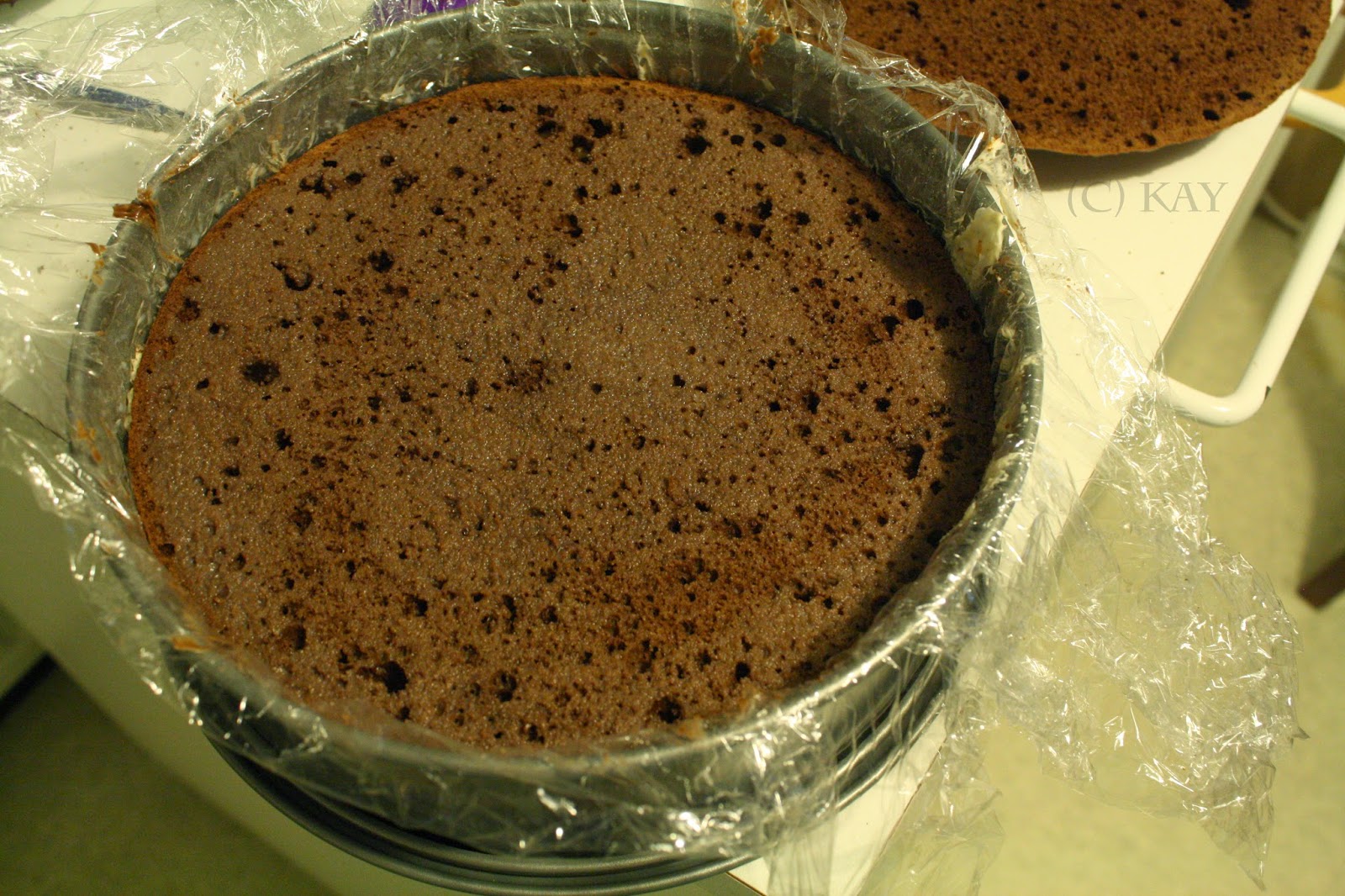 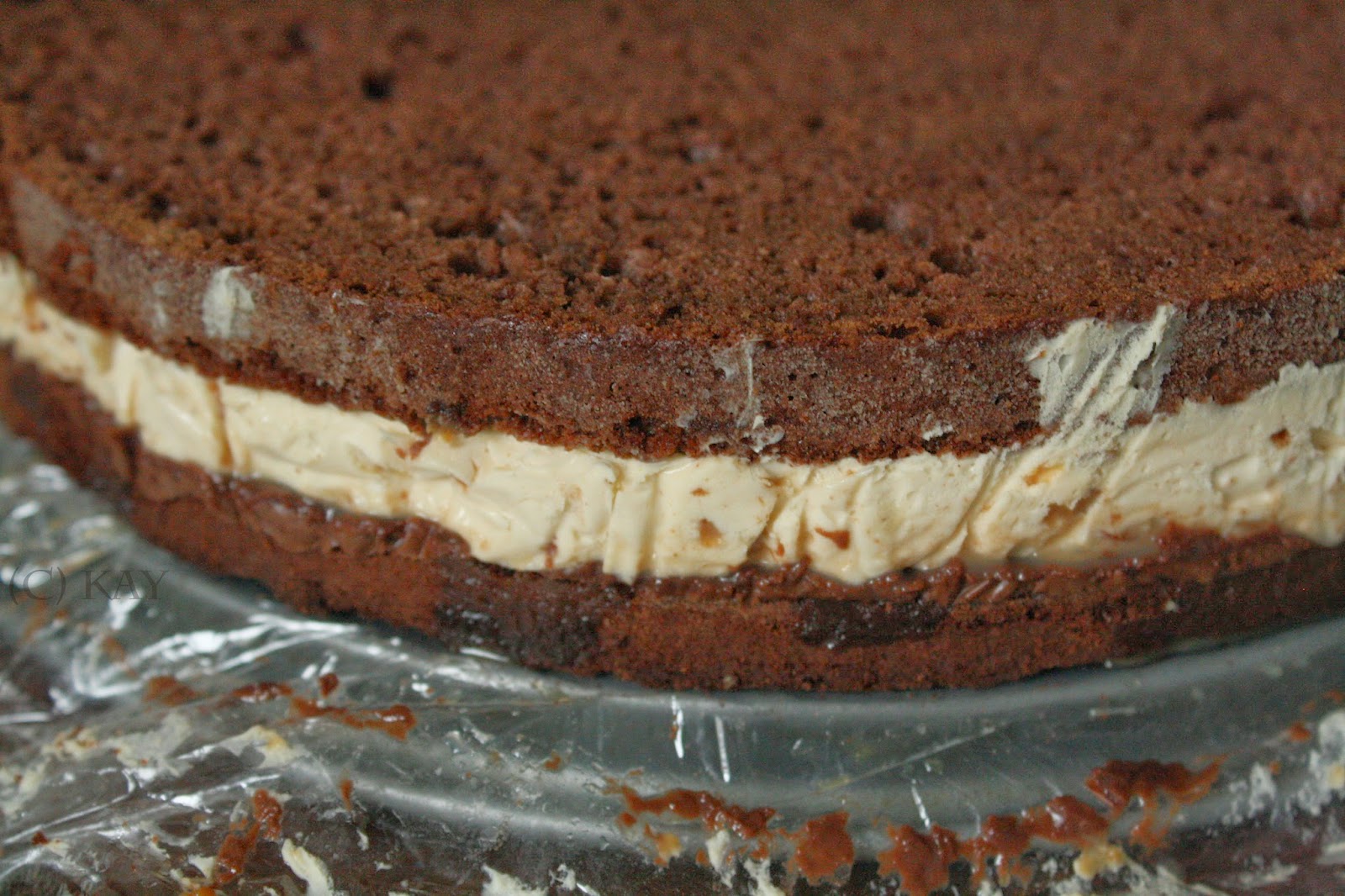 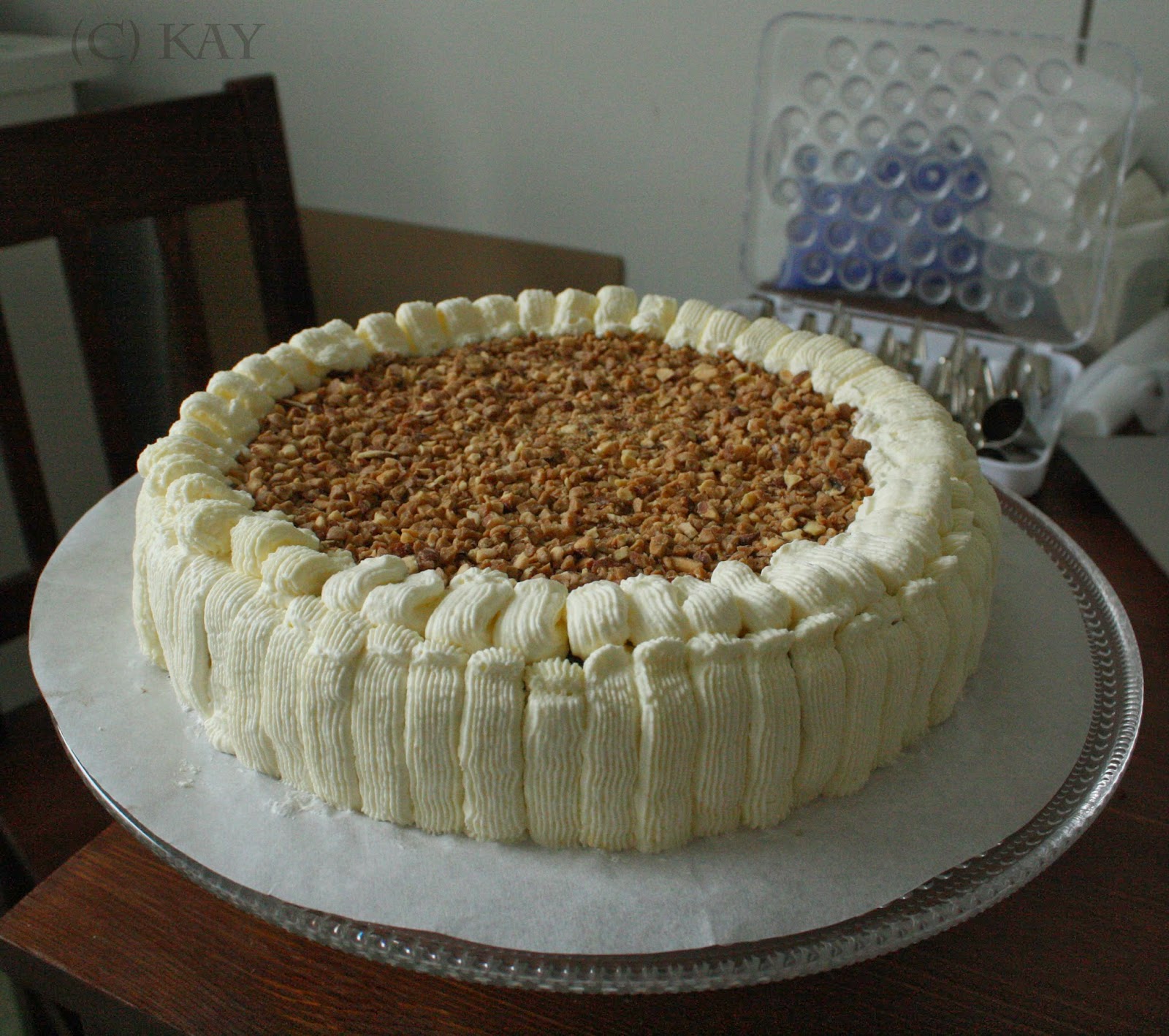 My panel of judges said that the filling could have used even more of the Wiener nougat because of the espresso. I think that if you stick to the recipe the flavours will be more balanced.

If there is anyone interested in trying any of the recipes that use something that is harder to find outside of Finland - like Turkisk peber or the original Wiener Nougat candy - I have news for you! Suomikauppa.fi (ENG) has all kinds of finnish goodies on offer. I'm not affiliated by them, I just thought I'd mention them because they deliver worldwide.

Welcome to follow me as I dabble in the world of cooking and baking. I share with you my experiences in as well as out of the kitchen.

Here you will find recipies that I have tried, my opinions on them and some tips and tricks that I have found helpful.

In all my recipes I use the Celcius scale!

I'm open to requests and I would love to hear your experiences on the recipies that I have here or if you have any tips or tricks of your own that you'd like to share.